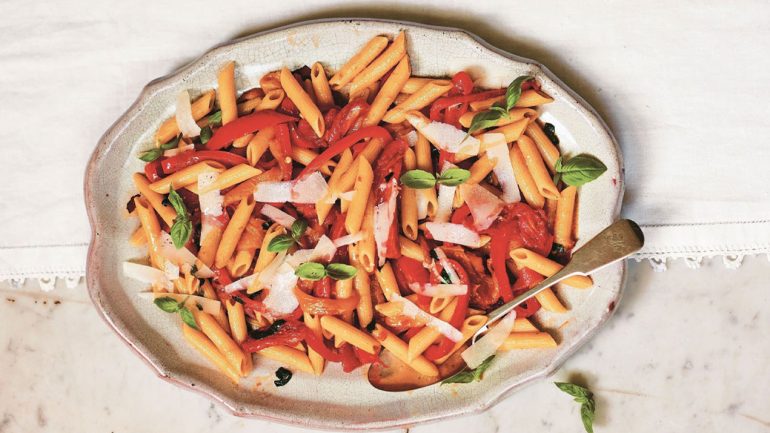 Prudence Wade speaks to the Italian chef about his favourite food, and why he’s dedicated an entire cookbook to it.

Within minutes of meeting Contaldo, it becomes clear this isn’t an act he puts on for the camera. The 70-year-old chef is exactly how he is on-screen: Warm, full of energy, and able to talk about food for hours. He’s even set up a little bit of home in his London back yard – a rustic outdoor Italian kitchen, complete with a wood-burning oven and vines growing around it. Unfortunately, East London grapes don’t make the best wine, so he settles for using them for vinegar instead.

Contaldo has lived in England for 50 years now, but his love of Italian cuisine is as strong as ever; his latest cooking book is dedicated entirely to the country’s national dish – pasta. He’s written or contributed to more than 10 books now, so it was perhaps high time he produced one that’s all about his favourite food. 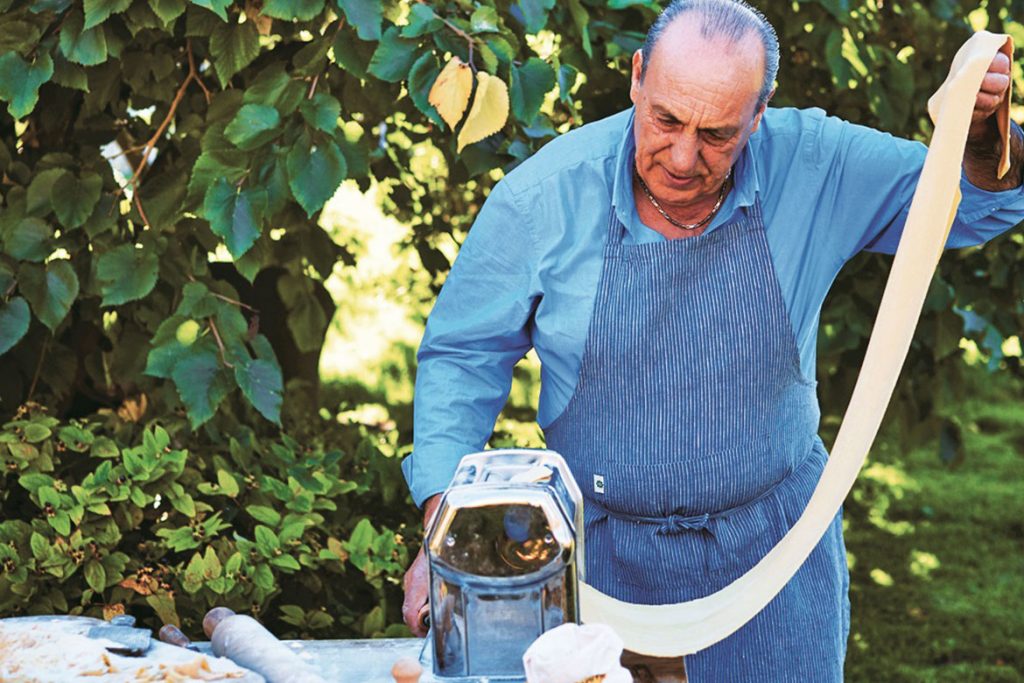 Pasta is love
Contaldo can’t help but wax lyrical about pasta. For him, it’s so much more than just food – it represents home, family and love.

“To me, the only way to remind me of childhood is my mother, my father and my sister making fresh pasta,” he says wistfully. “It’s very romantic. Fresh pasta for me means warmness and family, like a wood fired oven when it’s cold.”

This gets him talking about Minori, the town on the Italian Amalfi Coast where he grew up. “I remember there used to be pastificio [pasta factory] – there was only one in my home town, it was on the promenade by the sea,” Contaldo reminisces.

He thinks back to how this pastificio used to stand two poles on the promenade, with long strings of spaghetti hanging between them to dry – which is pretty much the most stereotypical Italian scene you can imagine.

Contaldo can’t even remember how he learned to make pasta, because it’s been around him his whole life. “I could almost have been a spaghetti!” he says, exploding with laughter.

With such fond memories of home-made pasta growing up, it felt natural that Contaldo would carry this love into his adult life – and he wants other people to share in this warmth. The process, he says, is “nice if you have a family, a boyfriend, a lover, a mother, a father, children – you come home, it takes a minute to mix it, then you roll it out”.

At its core, Contaldo thinks pasta is a “symbol of love”, but it helps that “also it tastes good”, he adds with his signature chuckle.

Pasta is Italy
Much of the book explores the history of pasta, and the different recipes from various regions in Italy. “The Italians are very proud because everyone makes their own version of pasta, but at the end it’s all the same,” says Contaldo.

For him, it was particularly important to pay tribute to the different regions and histories of each dish. “History is culture,” Contaldo explains. “And you have to respect the traditions and the cultures of people. When you make fresh pasta, it’s in celebration,” he adds. “Even breaking one egg is a celebration.”

It’s been a long time since he lived in Italy, so Contaldo uses cooking to connect him with his homeland. “When you grow up, move to different countries perhaps, when you fancy a bit of fresh pasta, you know how to make it,” he says.

He has a huge amount of national pride in pasta, which becomes abundantly clear when he starts reeling off long lists of all the different varieties there are – something which lasts a very long time and he does more than once during our conversation.

“I discover a new way of making pasta almost every month,” he adds, without even a hint of boastfulness.

But what he really wants to do is encourage people to make their own. For some reason, whipping up fresh pasta has the reputation of being labour-intensive and tricky, which couldn’t be further from the truth. More than once, Contaldo reels off the basic pasta recipe (which is literally just eggs and flour), proclaiming how “easy” it is – and not to mention cheap.

This doesn’t mean people don’t mess it up, but Contaldo is clear about the most common mistakes to watch out for. “Overcooked pasta,” he says with a grimace. “Sometimes it’s so much overcooked that it’s like glue. Another mistake is putting too much sauce on it – 150g of sauce is enough for 100g of pasta.” There’s a reason why pasta should be cooked al dente too, which in Italian means ‘to the tooth’. If it’s slightly under-cooked, Contaldo says: “You chew longer, and when you chew longer it tastes better and has more flavour. It also helps with your digestion.”

Contaldo’s final word on all things pasta? “Pasta doesn’t make you fat,” he says with a chuckle. “It’s the sauce you put on top.”

Words by By Prudence Wade, PA 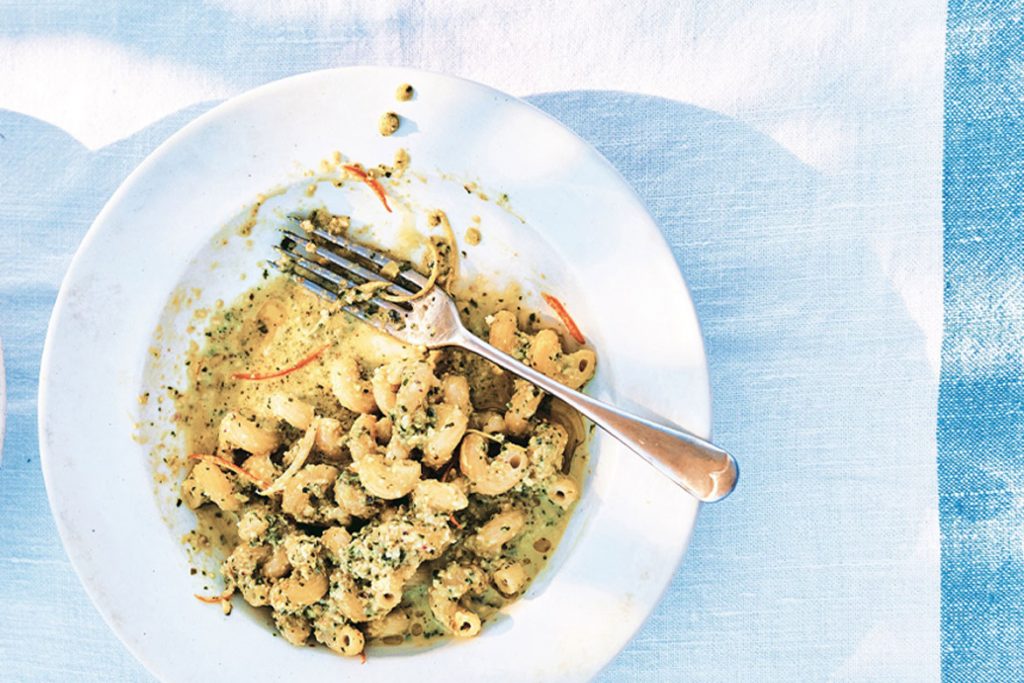 METHOD
Using a sharp knife, segment the peeled oranges by cutting between the segment walls, discarding the pith but keeping any juice that collects.

Put the segments and juice into a large bowl, add the capers, oregano, garlic and a pinch of salt, stir to combine and leave to infuse for about 10 minutes while you prepare the other ingredients.

Bring a large saucepan of salted water to the boil and cook the spirali until al dente (check the instructions on your packet for cooking time).

Put the basil leaves, almonds, pistachio nuts, olive oil and the infused orange mixture into a food processor and blitz until smooth and creamy.

Drain the spirali, mix with the citrus pesto and serve immediately, sprinkled with the orange and lemon zest. 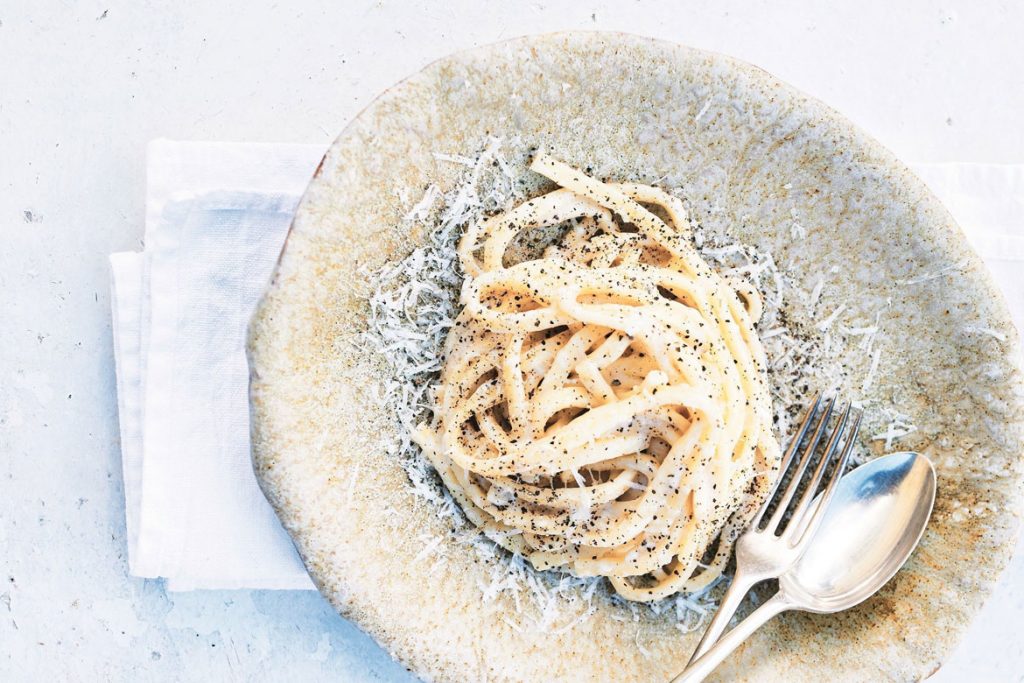 METHOD
Make the pasta dough. Put the flour into a large mixing bowl or heap on a clean work surface. Make a well in the centre, add the eggs and mix well together to form a dough. Wrap in cling film and chill in the refrigerator for 30 minutes, or until required.

Heat a large dry frying pan over a high heat and briefly toast the peppercorns. Transfer the peppercorns to a pestle and mortar and crush until fine. Put the crushed pepper back into the frying pan, but keep off the heat.

Put the Pecorino cheese into a bowl and set aside. Bring a large saucepan of salted water to the boil, add the tonnarelli pasta and cook for just under two minutes, until al dente. As the pasta begins to cook, scoop out a ladleful of the pasta water and add to the frying pan with the pepper, set over a medium heat. Take another couple of ladlefuls of pasta water and add the bowl with the Pecorino, mixing well until you obtain a creamy mixture.

When the pasta is cooked, use a pair of tongs to transfer it to the frying pan. Increase the heat to high and cook for one minute. Remove the frying pan from the heat, add the cheesy mixture to the pasta and mix until well combined. Serve immediately with a sprinkling of grated Pecorino and some more freshly ground black pepper. 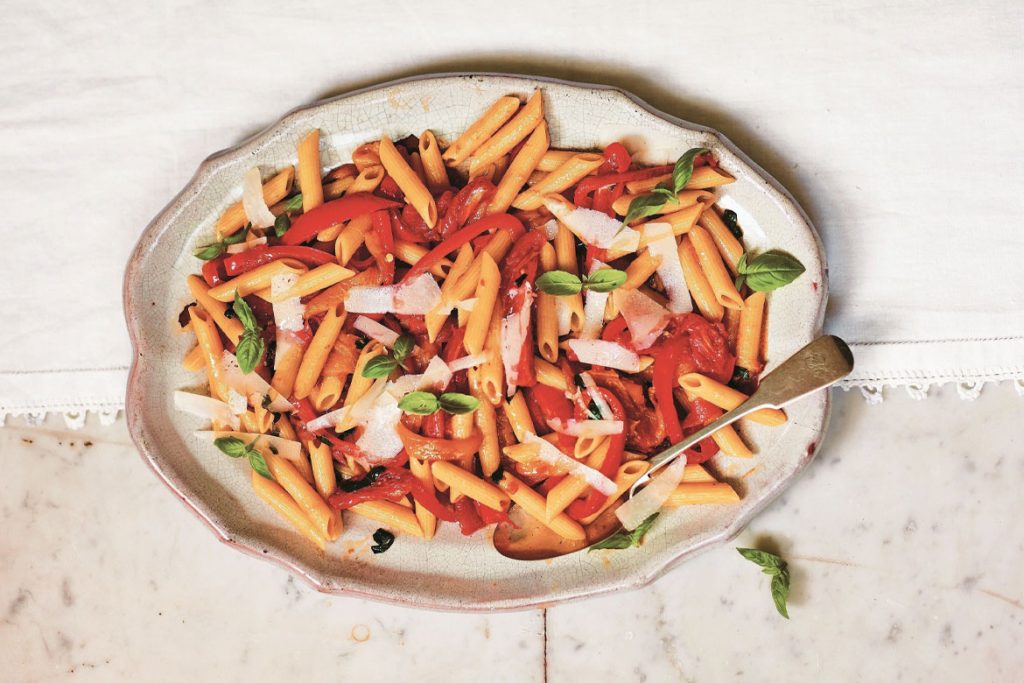 METHOD
Preheat the oven to 180°C fan/200°C/400°F/gas mark 6. Put the yellow (bell) peppers into a roasting pan and dry-roast in the hot oven for about 35 minutes, until the skin is golden-brown and the peppers have softened.

Meanwhile, bring some water to the boil. Submerge the tomatoes in the boiling water for two minutes, then drain, remove the skins and seeds, and finely chop the flesh. Set aside.

When the yellow peppers are ready, carefully remove the skins and seeds, and roughly chop the flesh. Set aside.

Heat the olive oil in a large frying pan (skillet) over a medium heat, add the garlic and chilli, and sweat for one minute. Add the red (bell) peppers and continue to cook for about 10 minutes, until the peppers have softened. Stir in the roasted yellow peppers and tomatoes, add some salt and stir-fry over a high heat for one minute. Reduce the heat back to medium, cover with a lid and cook for about 10 minutes, while you cook the pasta.

Bring a large saucepan of salted water to the boil and cook the pasta until al dente (check the instructions on your packet for cooking time). Drain the pasta, reserving a little of the cooking water. Add the pasta to the peppers along with a little of the cooking water and mix well to combine while still on the heat. Stir in the parsley, then remove from the heat and serve with shavings of Pecorino cheese.