The Coleman Marine Insurance team enjoyed a busy 10 days at the Southampton Boat Show which took place from 14th – 23rd September.  The popular event, which is in its 50th year, is one of the major events in the global boat show calendar, with many marine companies choosing to launch their new innovative products at the event.  The Show provides a major boost for both the local and wider marine economies and it was reported that this year the organisers welcomed 80 new brands to its 500+ strong fleet of exhibitors. 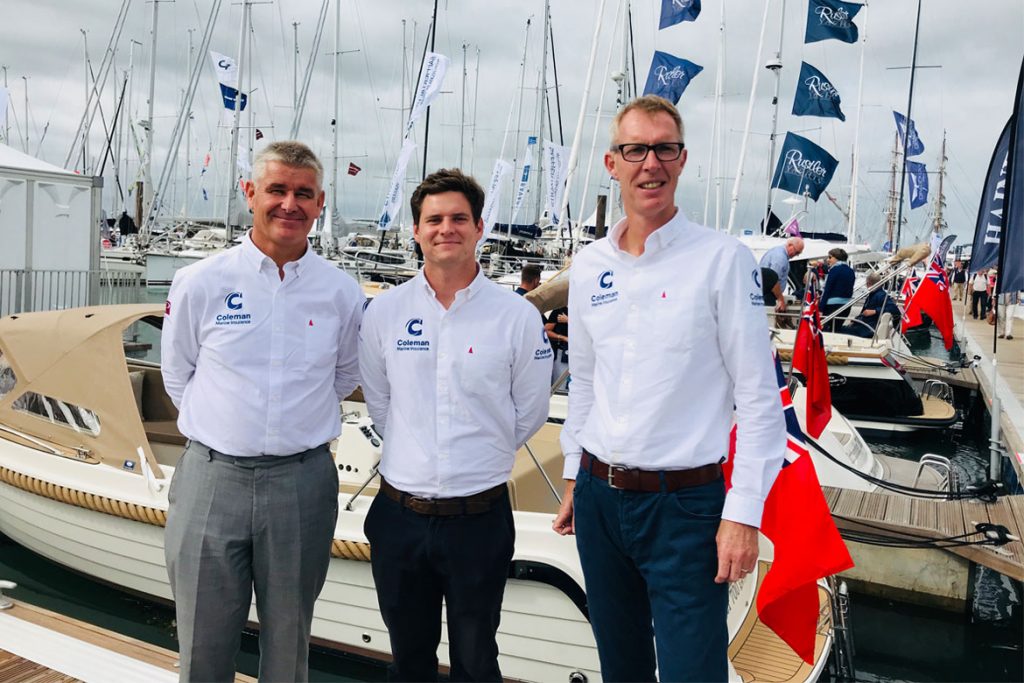 “Summer sunshine has boosted sales market”
Coleman Marine Insurance’s Yacht & Commercial Craft Development Executive Tony Pauffley attends many of the leading Boat Shows in Europe but advised that Southampton is one of his favourites and an important event in the boating calendar.  Tony commented, “It’s been a great season, boosted by the fantastic weather that we’ve enjoyed and this has given people the opportunity to make good use of their boats.  Boat dealers at Southampton have noticed that people are coming and looking to upgrade their boats, having been inspired by the stunning weather.”

Tony continued, “Over the last year our marine trade client business has increased significantly, meaning that we now cover more exhibitors at the Show than we have ever before. It’s really good to reconnect with them all, catch up and of course make new connections.” 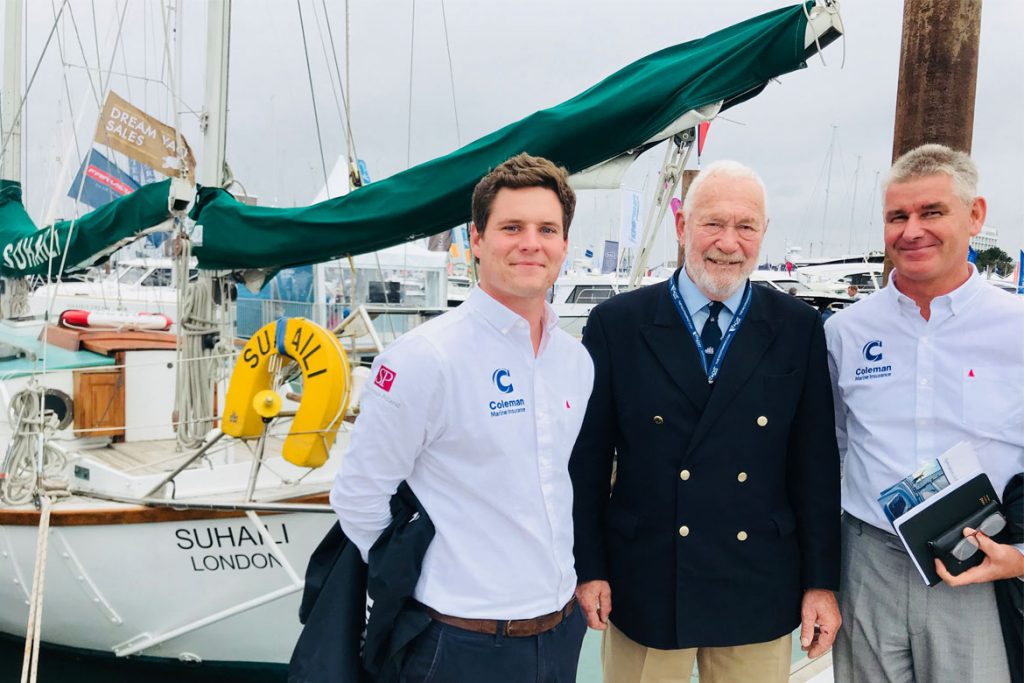 Luxury Sunseeker Charters
Tony caught up with Stefan Wertans, Director and Co-Founder of Sunseeker Charters who advised, “The current market is extremely good. At Sunseeker Charters we work hand in hand with all the Sunseeker distributers and service their clients by putting their boats in to charter and creating an income for them.  We service two ends; those who want to try out a particular model and take a charter for a week, to ‘try before they buy’.

The other market is the luxury holiday market where clients can have their own private island for a week and experience the ultimate luxury holiday, choosing their location and itinerary. 90% of our boats have their own dedicated chefs on board. We get amazing feedback from our clients, many of whom do multiple charters with us throughout the year.” 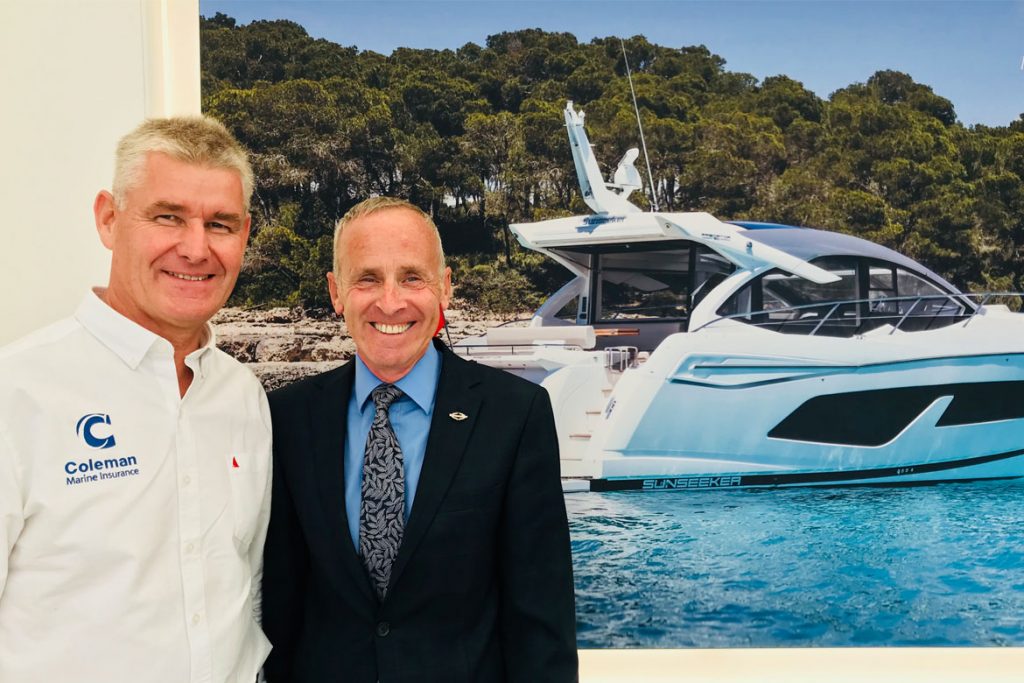 Flying the flag for Poole…
Poole Harbour Commissioners were represented at the Show by Marketing Manager, Tracy Payne and Poole Harbour Marina Manager Kerrie Gray.  They both enthused, “We are here to put Poole Harbour on the map, raise awareness and let everyone know that it is open for business!  It’s been an incredibly exciting year for us with the opening of the World’s newest cruise berth at South Quay.  We’re also having lots of conversations and meetings about the upcoming 2019 Poole Harbour Boat Show.  We’ve signed lots of people up and already half of the marina is sold out for the event.

Momentum is really good and everyone is being hugely positive about our event which has given us the possible option to expand the number of boats on the water, growing the event even more on the back of the success of 2018.”  Tracy added, “It’s another busy week next week as we’ll be exhibiting at ‘Sea Trade Med’ in Lisbon.  We will use this as another opportunity to showcase Poole Harbour and South Quay as a ‘must visit’  cruise destination.” 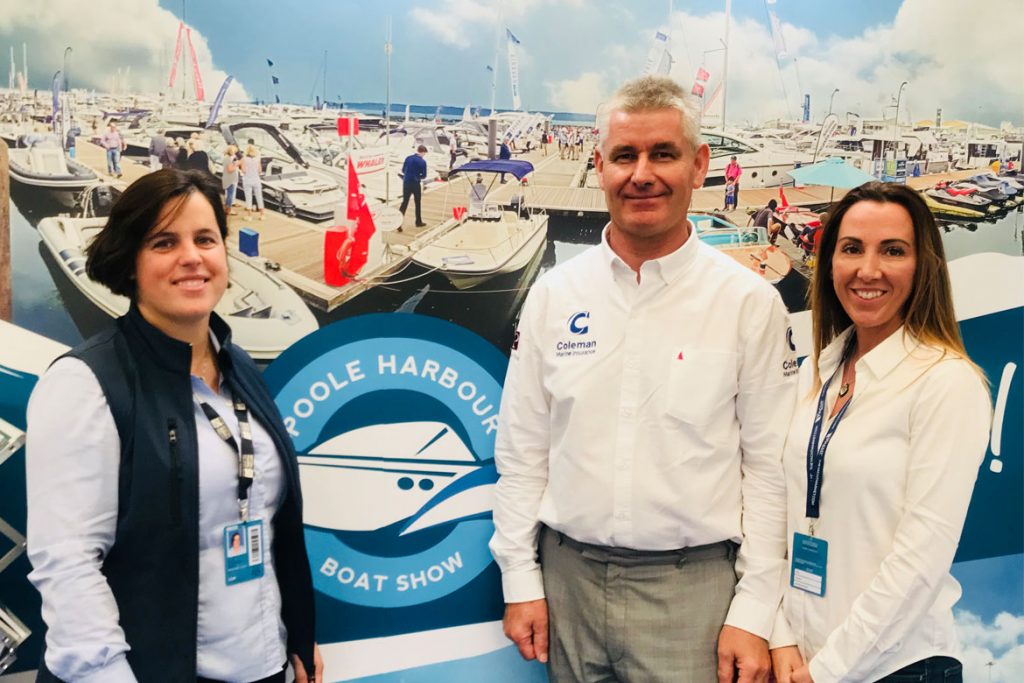 Jeanneau motor boats – “weak pound has positively impacted on new boat sales”
Dominic Smulders, owner & Sales Director of TBS Boat Sales based in Bray in Windsor, is a stockist of Jeanneau power boats.  Dominic said, “It’s an incredibly important time of the year for us. At the Southampton Boat Show we get to meet up with lots of existing customers and talk about upgrading. We also meet lots of new connections who come to the Show, specifically to seek us out and look at different boats.  Southampton has become even more significant for the industry because of the demise of the London Boat Show this year.  Jeanneau expect to sell between 40 – 50 boats at the Show, amongst all their dealers, and the orders we take now will be delivered in  Spring 2019.

“The biggest issue for us at the moment is factory availability because there has been increased demand for the product.  Because of the weak pound, a lot of the good used boats have been sold in to Europe which has had a positive impact on new boat sales.”

Dominic observed, “Buyers at the Southampton Boat Show are a real mix of people and ages.  We are seeing lots of people converting from sailing to power boats and it’s surprising just how many Thames customers we see here too.  We have very competitive finance rates as Jeanneau are part owners of SGB Finance and lots of buyers are genuinely surprised at how affordable buying one of our boats can be.” 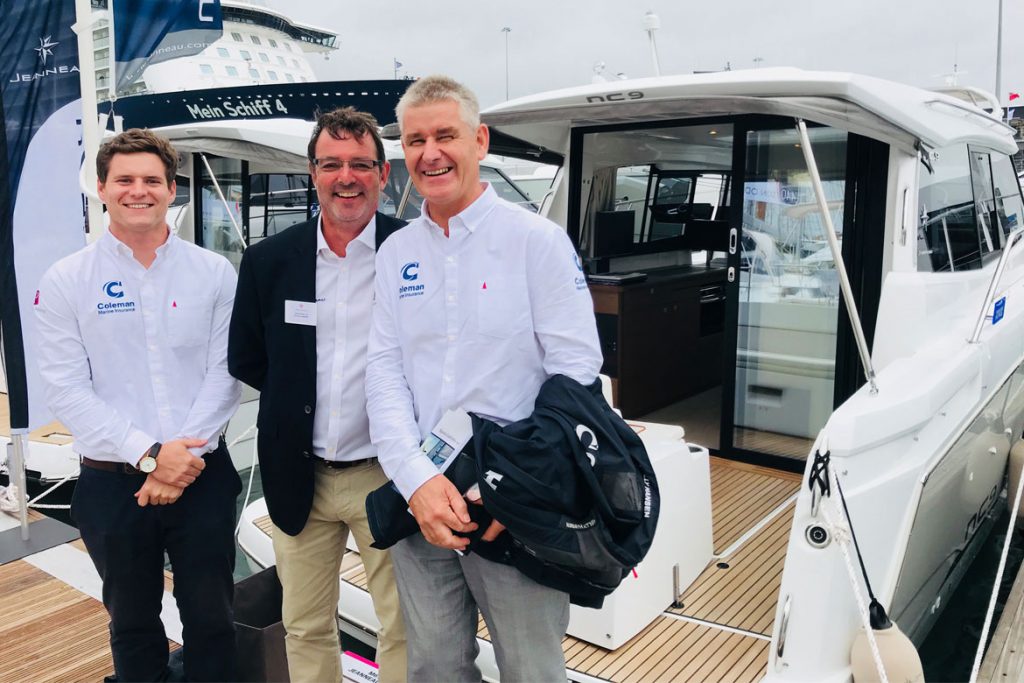 Argo Yachting, whose strap line is ‘beyond brokerage’, will set itself apart from other areas of the group by offering a focused approach to brokerage of all brands and models of motor yachts, with a particular focus on the 30ft to 30m market. Senior Broker, Jon Ford commented, “Central to our ethos at Argo Yachting is the full-service package, offered to customers working with us.  We know how important selling or purchasing a yacht is and we’re dedicated to ensuring this process is as smooth as possible. Rather than just handing the keys across we provide a service technician to offer a technical orientation to the owner’s new boat, together with the option of a service and warranty package to provide end to end service.” 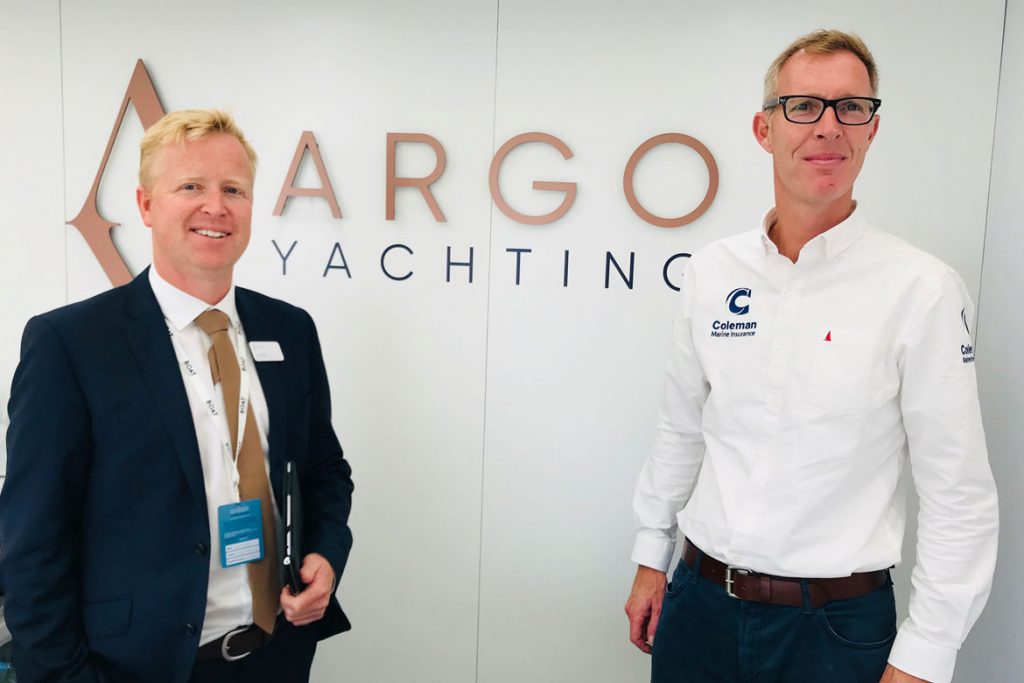 Azimut Yachts UK
Azimut Yachts UK has two bases in the UK – Eastbourne and Southampton. MD Richard Cottrell enthused, “This Show has been great, very upbeat and lots of clients are in the mood after the fantastic summer that we enjoyed! The weather has certainly got the UK boating market all enthusiastic about boating!  I’ve just got back from the Cannes Show and there were a record number of British buyers out there. At Cannes we launched 4 new boats.  At the Southampton Boat Show we’ve launched and premiered one new boat from that range – Atlantis 51, retailing at Full Med Spec, £958,000 including VAT. We’ve been getting lots of interest.” 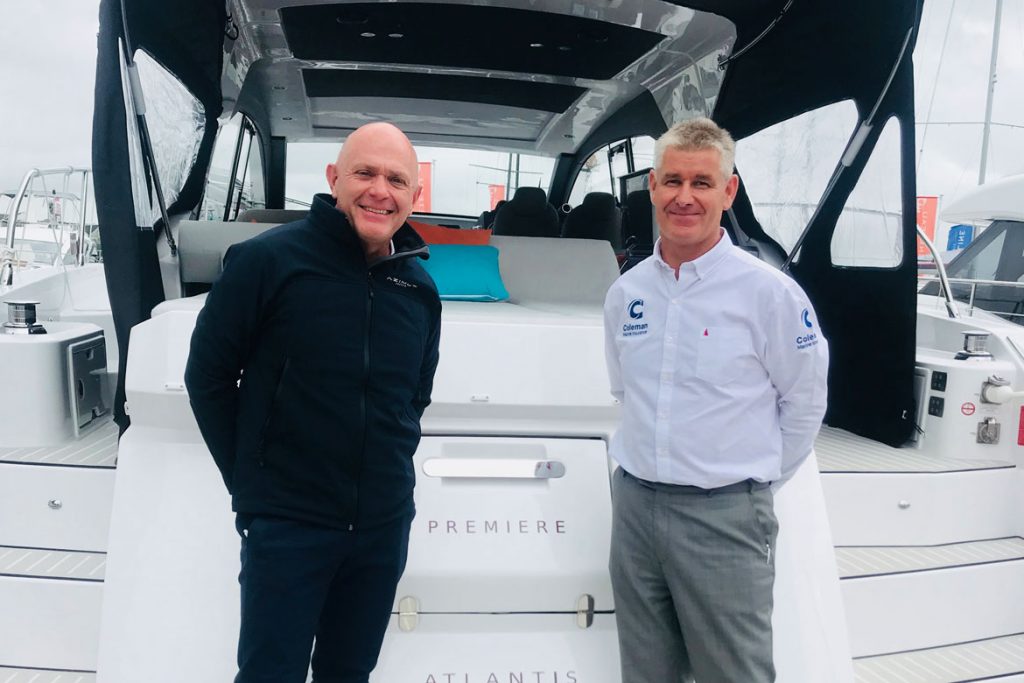 The Wave – illustrating marine plastic litter
The Wave project is a collaboration between the University of Southampton, School of Ocean & Earth Science and Turner Sims Southampton.  The Wave is an installation which illustrates artistically the plethora of marine plastic litter that has been fished out of the water in Empress Dock in Southampton, during the Spring of 2018.  Moira MacLean, Research Technician at Southampton University advised, “The team behind the project were keen to show that plastic is not just a problem that is isolated to other areas across the globe but exists on our doorstep, here in Southampton.  We want everyone who’s strolling near the coastline to know that they can make a difference by reducing their use of plastic and by disposing of their rubbish correctly.”

Visitors to the display were encouraged to create origami boats, made out of out-of-date flyers, to place on the Wave on which they wrote their pledges on what they could do to help their use of plastic. 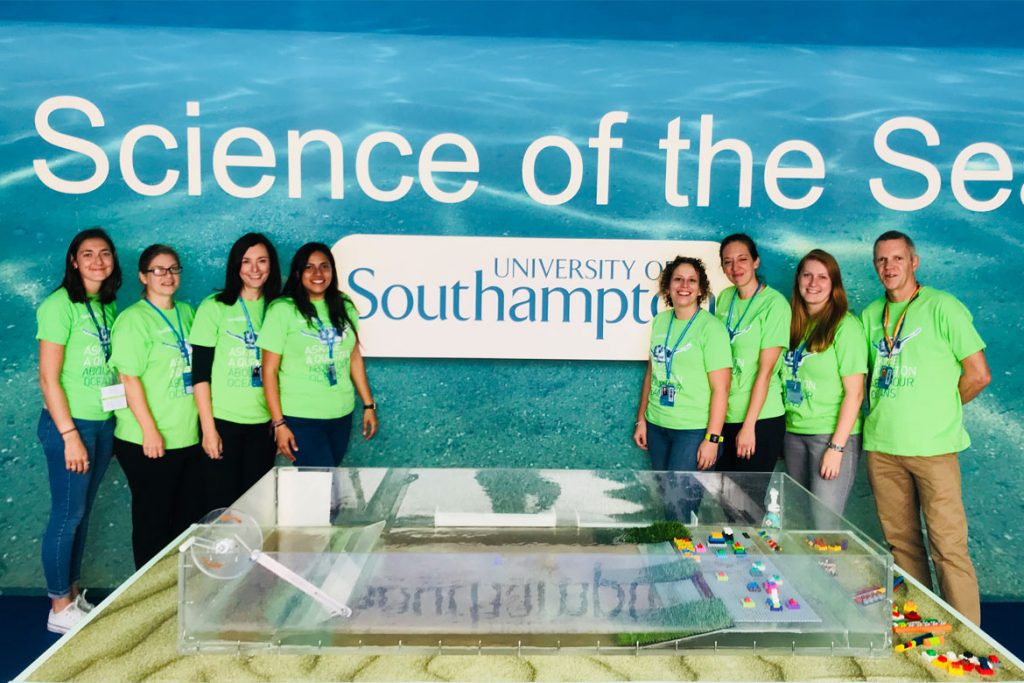 ABOVE: Science of the Sea, Southampton University 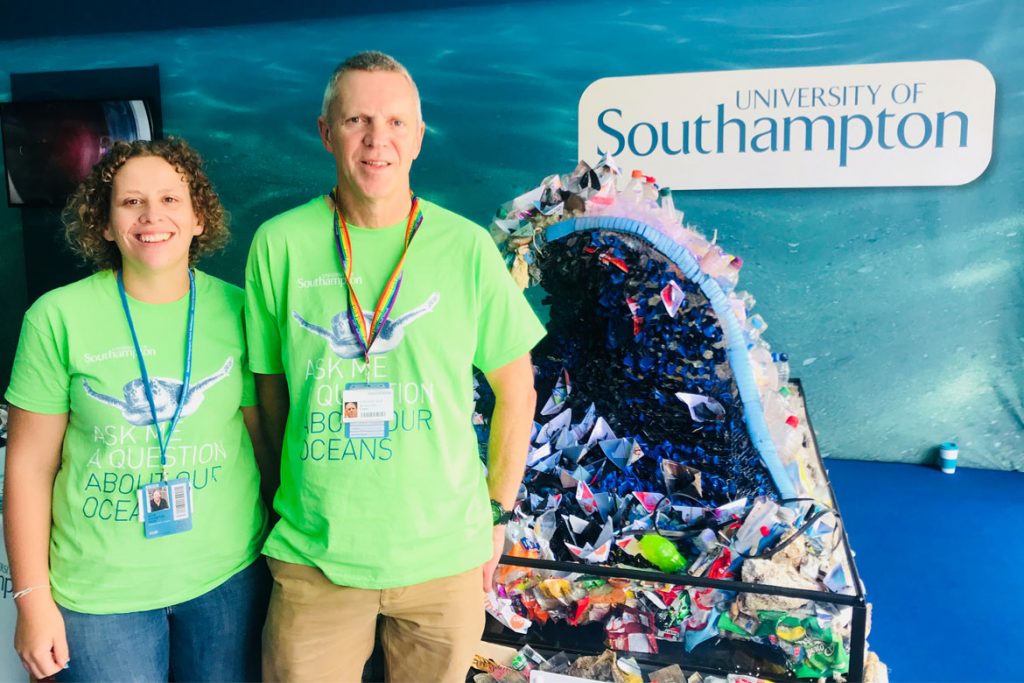